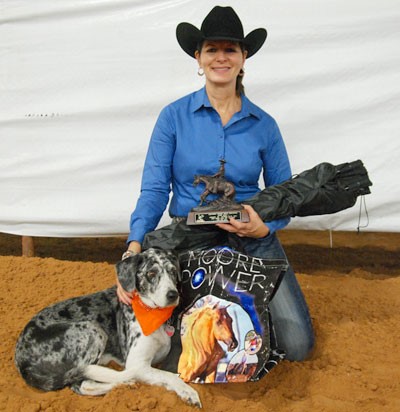 The Novice Horse Non Pro class closed out the day at the SWRHA Futurity, but not until the 37 horse-and-rider teams competed. As the 23rd draw, Sherry Sumpter and This Guns The Won (Gunners Indian x Spin Some Magic) took the lead with a score of 72 in the Level 2 despite her nerves.

“I was nervous before I went in because it’s been a long time since I’ve shown, but this feels amazing. It was a lot of fun,” Sumpter said. “Everything worked out as planned today, believe it or not. I was a little bit worried about my turn to the left but everything worked and we didn’t have any penalties. We really just wanted to see where we were at because we want to do the derbies next year. Now we know what to work on.”

Sumpter thanked her trainer Sam Smith. Smith and Sumpter have worked together before when they were both living in Ohio.

“Next year is going to be a lot of fun!” She added.

Sumpter and the 4-year-old gelding that she co-owns with her stepdaughter Ginger Dwyer, garnered a $587 paycheck and also received a Pewter Trophy, Monogrammed Captain Chair, $50 Cowboy Couture Gift Certificate, and a Thomas Moore Tote with a Gift Certificate.