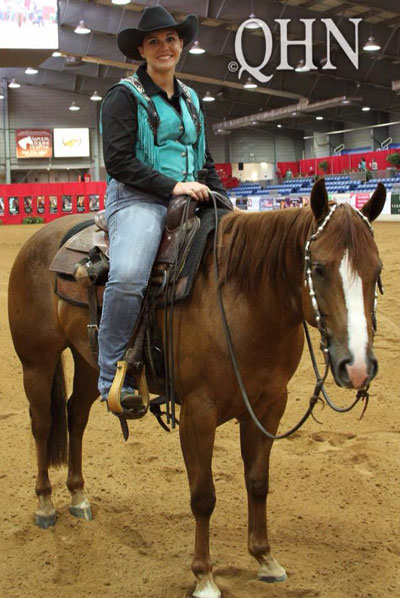 Jessicah Keller, of Madill, Oklahoma, and Malena Chic Olena won the Level 4 Non-Pro Championship at the Turnabout Farm Futurity Non-Pro at the Tulsa Reining Classic, with a scorching 222.5. There was $26,000 in added money in this event and Jessica, along with her coach Sam Smith were very pleased to win this prestigious event.

The Turnabout Farm Futurity Non-Pro at the Tulsa Reining Classic, held at the Expo Square from Aug. 31-Sept. 6, featured $26,000 in added money. Jessicah Keller, of Madill, Oklahoma, and Malena Chic Olena won the Level 4 Non-Pro Championship with a 222.5.

“I have a sister to her mother that I won the [National Reining Horse Association (NRHA)] Novice Horse Non-Pro World Championship on,” Keller explained. “Her mother actually got hurt as a 3-year-old. We got her back and she wound up winning about $18,000, but she was never able to do what she could have because she got hurt.”

Malena Chic Olena, who pocketed $5,427 for this performance, is Malena Chex’s oldest foal and has impressed Keller from the start.

“I’ve always been pretty high on and excited about her, so winning this is pretty big,” she said. “I was a complete non-pro today. Sam [Smith] got her ready for me and I showed up and rode her a little bit this morning, and then went and showed. I was tickled to death with her whole run.”

Keller expressed her thanks to Sam Smith and numerous other people.

“I definitely thank Sam because he’s done a lot of work. I also thank my mom for being so supportive. I thank Doug Gerard, my boyfriend Will Sherwood, [who] has been very supportive, and my sister Sarah was here jumping up and down all excited,” she said.